Who’s in the Woods? The Winter Bird Survey

Working quietly in the woods all winter, Tom Williams has been recording the populations of winter birds. To do this survey, it requires an extra layer or two of warm clothing and a well-trained ear for listening to bird song, watching, identifying and logging the species present in the woods. During the winter there are broadly, two kinds of birds; those that are year-round residents and the seasonal migrants arriving from the north and east for a warmer winter (coinciding with many of the summer woodland birds as they leave for warmer climes)

As Fingle’s wildlife species records grow, this year’s winter bird survey is the first of its kind. Tom explained that, “although the migrant species such as pied flycatcher and redstart are absent over the winter months, the woods continue to provide an important resource for both resident species and winter visitors. In addition, the winter survey work allows the monitoring of early breeding species such as the raven, common crossbill and lesser spotted woodpecker in advance of the main nesting season.”

Between November and March, Tom visited Fingle twelve times, ensuring good coverage of the entire 339 hectares through different months and varying weather conditions. Though the avian activity may be lower, or less apparent, during the winter, Tom still managed to achieve more than 1600 individual bird records during the survey times. He produced a full detailed report of all these confirmed identifications which is summarised here into a few general areas.

Firstly, while walking along the river, Tom recorded the goosander five times, reporting that there were “mixed groups of up to three birds.” There were also regular sightings of herons and dippers and a few grey wagtails that appeared in February. An interesting waterside bird seen by Tom was the kingfisher. He said it was, “unrecorded during the 2018 breeding season, but there were five sightings during the winter surveys. They may have moved in to breed or are possibly just over wintering.” Time, and further surveys will reveal more on this spectacular species.

A goosander pair wintering on the Teign

The most noticeable birds in the winter tend to congregate in flocks, twittering in the tree tops as they feed and communicate together. These social groups often include the diminutive goldcrest and the coal tit, the most numerous winter bird. The blue tit and the great tit also tend to join these larger groups and, on occasions, large flocks of fifteen or more long-tailed tits are present too. They can be quite conspicuous as they sweep through the canopy in search of food. Another bird that appears among these numbers is the marsh tit. This is one that is a special conservation priority at Fingle Woods. Tom reported that, “marsh tits usually overwinter in an expanded area based around their breeding territory, so it is likely that some of these birds are also breeding here.”

Thirdly, the ‘old favourites’ like the robin and wren can be seen and heard during the winter. They don’t occupy any particular habitat and are common across the site. That doesn’t detract from the enjoyment we can experience from the bright, enthusiastic singing heard through the darker months though. Also present in the winter woods is the blackbird which can often be heard rustling around in the leaf litter before catching sight of them.

Here all winter – robin and blackbird

When walking among the remnants of oak woods at Fingle, Tom recorded some broadleaf specialists. The nuthatch brought an occasional splash of colour to the leafless trees, while the chatter of woodpeckers was heard high up in the branches. At times the great spotted woodpeckers were a fairly regular sight but their scarcer cousins, the lesser spotted woodpeckers, were seen in and around their known breeding territories, particularly where old and decaying wood is standing. Green woodpeckers were recorded in low numbers and Tom explained, “they are not recorded as a breeding species but are clearly using the site over winter.” Another broadleaf specialist is the treecreeper which are small and well camouflaged against the bark of broadleaved trees. Many of these ‘broadleaf’ birds start to sing and breed in the early part of the season, hoping to get a head start before the summer species arrive from overseas. 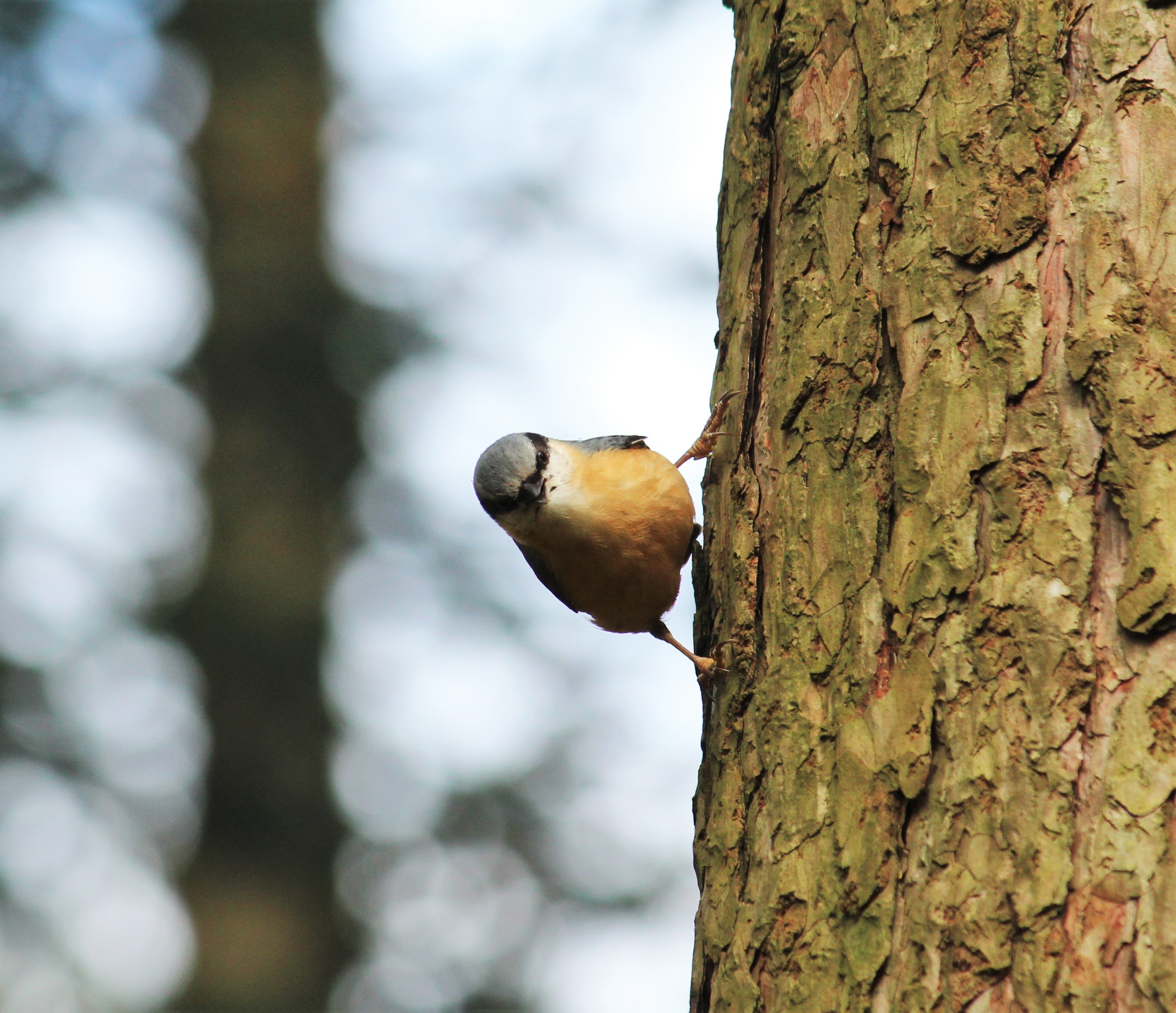 The next group that benefit from the woodland habitats at Fingle are the conifer specialists, including the siskin and the (not so common) common crossbill. These species can be seen and heard in the tops of spruce and other conifers but will sometimes visit other trees to find food. Tom commented that groups of siskin were regularly seen feeding on alder near the river. The presence of these two species shows that a proportion of conifers will need to remain in the mix of tree species during the future of the woodland restoration, demonstrating that diversity is the key to a good conservation project.

There are many other species worthy of a mention. In the scrubby woodland areas, there were dunnock and the colourful bullfinch. The melodic tunes of the song thrush were heard on many occasions and, groups of redpoll were also seen feeding on alder trees along the riverbank. Tom also reported seeing a number of woodcock that burst out from their leafy cover on the woodland floor, creating a bit of a surprise to those walking quietly in the woods.

There are many other species of birds around Fingle including the once ubiquitous, introduced pheasant that was dominant during the days of the ‘shoot’. Tom concluded by saying, “this survey gives us a good picture of the winter migrants and residents here at Fingle. It shows there is a different use of the site through the seasons, like the lesser spotted woodpecker that expands its territory during the winter. The results also provide a good comparison for long term monitoring and will help me to find some of the birds during the breeding season.” This accurate information is important for woodland management planning and highlights the areas where the restoration efforts can support a diversity of bird species throughout the year. One example being the focus on improving the availability of dead wood which supports many birds in their search for nest sites and food. As the overall record of wildlife develops, the site can be better managed for benefit of the many species here, creating a refuge for the breadth and diversity of woodland life.